Searching In No Mans’s Land

For this exhibition I have brought together different pieces created in previous periods which generate and shed light on my present work.

Most of them have not been shown in Barcelona before. All of them revolve around the central themes upon which my work has been focused over the last six years.

The starting point is a group of sculptures created between 2008 and 2011 for a large installation that l called “El Final de las Apariencias” (The and of Appearances). This set of sculptures, created from actual paint that has been moulded and dried, was an allegory for the end ofthe artificial use of paint itself, converting it into the constructive element of objects instead of being a material used to represent them. At the same time the installation was also a metaphor for the experience ofthe fragility and deterioration of the present, the horror of time, expressed in a group of volumes which, due to their hrittlr nature, were a challenge for me in the three-dimensional field.

On show here are three pieces which, although created almost in the same period, did not form part of this group. The first one is a large safe that opens its weighty doors to us like the open belly of a wounded giant showing his decaying guts. This sculpture, unlike the installation. is a work in itself. It is completed by a very condensed drawing of intense formal analysis that was done in 2012, on show here by courtesy ofa private collector. The second is the set of a heavy table and its damaged chair, which were exhibited in Berlin in 2011. It is accompanied by a drawing entitled Mesa negvu (Black Table) done a little earlier ofthe real table that was the model for the sculpture.

Some ofthese drawings were done at almost the same time as the sculptures as part of the exercise of creating them. Others resulted from the sculptures and constituted for me a way of recovering working in two dimensions, something which l had never intended to abandon.

After the sculptures were made, many ofthe objects created remained in my studio as silent presences; for months l walked among them, like trees in a semi-destroyed forest afflicted by a strange disease. Their spectral presence resonating under spot lights is captured again in some ofthe new paintings.

For the drawings on vegetable paper l have brought together different examples which also have not been shown in the city. The first and most intense is “Blancos de luz de plomo” (Whites of Lead Light), loaned by the Fundacion Sorigué for this exhibition. The work points us to a description of dense atmospheres in which the central object is light itself and the composition is developed in a coherent space.

Next are some small-format pieces from “The End of Appearances” group and, hack in large-format, the drawing in three pieces “Transferencia y amenaza” (Transference and Threat), owned by Laboratorios Salvat, which is from a period of distancing from the optical space and supremacy of lineal description. The precise and delicate marks onthe white ofthe paper transforms it into a type of “map of forms” that alternates a more lineal and analytical vision with the tangible quality ofthe rubbed grey. This idea ofthe map becomes still more apparent in the drawing entitled “Mapa de formas” (Map of Forms), a series of anatomical studies in which form is distributed randomly over the flat space as dance in movement. Other smaller Figurative drawings accompany this piece to add to the human presence in the show.

The technique used in the more elaborate and atmospheric drawings was based on successive layers of material on paper that dried slowly until achieving, despite their limited texture, an almost pictorial density. Perhaps this was what drew me to look for these same effects with colour, treating it very differently lo how l had done previously.

During my artistic training I had practiced the procedures and techniques used in the historical periods just preceding the appearance of oil painting as the dominant European technique. So l was familiar with the delicate textures of colours and almost insubstantial aspect of tempera painting, and had transferred it, employing different solutions, to my own work.

Now, once again, I returned to the discipline of large preparations of coloured ground, but applied them in broad areas that resulted in irregularities and cracks which alter the sensation of optical space in the work and reveal the material artiflciality of paint itself.
Without trying to I ended up in a place similar to “The End of Appearances”, demonstrating how paint is only material, revealing that the game of illusion of form has in essence a material quality. 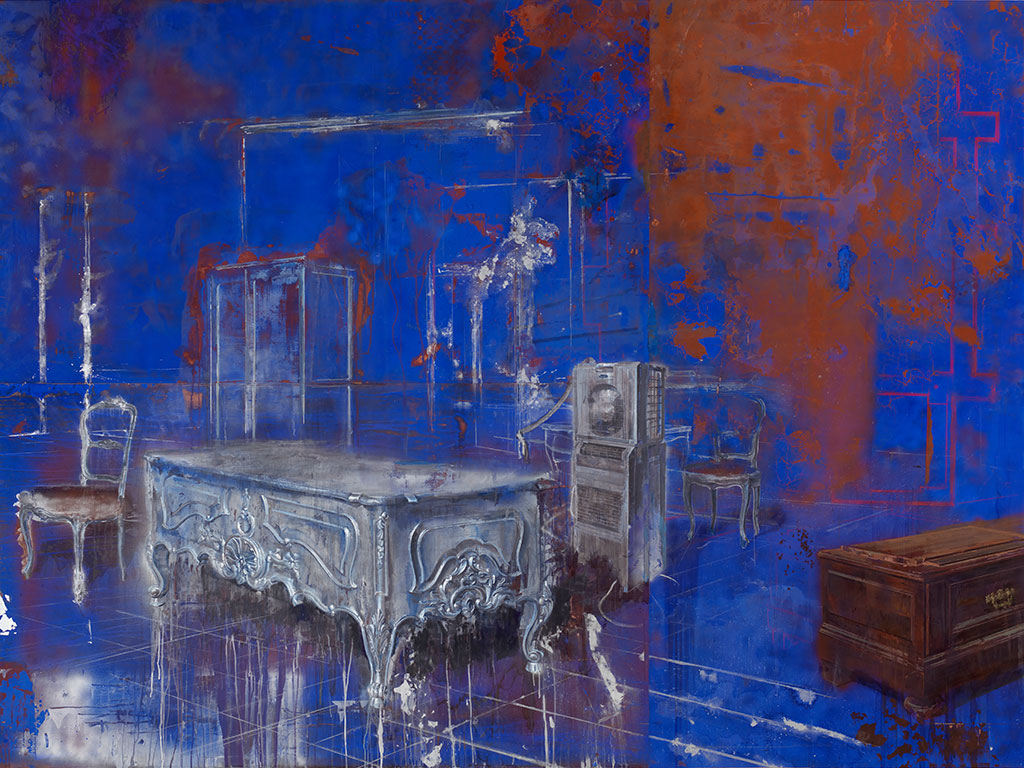 The painting “Azul rasgado” (Torn Blue) is one ofthese experiments in which the base colour itself plays a part in the work, being a pictorial motif and also a space where the game of forms is played out.

The silver table stands out as a geometric prism on a colour with suggestions of space. The whole form is described but unstressed, almost as in a drawing, with some parts being denser, but never meticulous, where everything has a certain air of lightness. 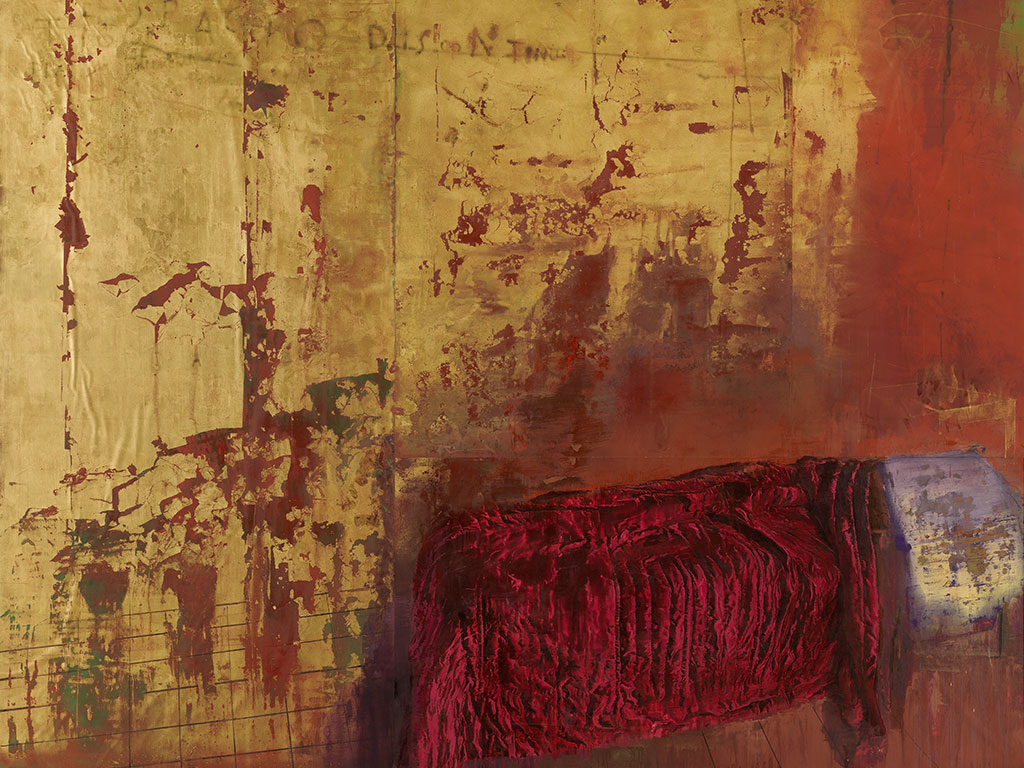 ln “Pintura de los muebles de oro” (Painting of Gold Furniture) the objects are spaced out, compact but incomplete. The patches of gold are broken and fragmented lilte a reflection of the objects represented, revealing their insubstantiality.

The reiterative technique, based on observation, of slowly adding material to the support leaves a trail of accidents, rectifications and deliberate gestures that shows up errors and attempts, as well as a sharp and luminous vision that ensnares the viewer’s gaze.

There is something tremulous and fragile, something sensory and specific in manual creation which, unlike images obtained by technical means, makes it, in my opinion, more solid and long-lasting, perhaps because it contains a part of us. The personal commitment of devoting yourself to this search becomes, as a product of an obsession, a journey through an inhospitable territory where there are no maps, only wonderment at each new attempt to create.